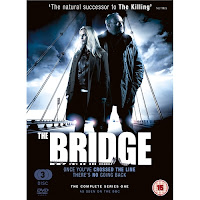 3 comments:
Email ThisBlogThis!Share to TwitterShare to FacebookShare to Pinterest

Detective Inspector Zoe Benedict investigates the brutal murder of a popular teenage girl which has shocked the local community while ensuring that secrets from her past remain hidden in the latest thriller from Mo Hayder.

Zoe’s estranged sister Sally is recently separated and struggling to bring up her rebellious daughter who was a friend of the victim. What lengths will she go to in order to keep her head above water financially and to keep her daughter out of harm’s way?

Mo Hayder exploded onto the crime fiction scene back in 2000 with her fantastic début, Birdman. It’s sequel, The Treatment, was arguably even better. These were ferocious serial killer tales that featured cop Jack Caffery and were too disturbing for many readers but became critically acclaimed bestsellers.

Several stand-alone thrillers followed which didn’t match up to the original two books and in 2008 Hayder returned to the character of Jack Caffery.

Hanging Hill is another departure from the security of a recurring character series and while it remains a police procedural it lacks the bite of the Caffery stories. Zoe Benedict is interesting enough but the investigation meanders along while Sally goes to work for a very shady character which leads to a tragic event that eventually re-unites the two.

This competent but unimaginative thriller is for those not willing or able to delve into the depths of depravity that Hayder is very capable of exploring.

A convicted special agent gets the chance to earn his freedom in this futuristic action adventure from producer Luc Besson.

Guy Pearce (Memento, LA Confidential) is Snow and his mission is to rescue the president’s daughter from an orbiting maximum security prison where the inmates have just woken from a drug induced state of limbo.

This is Escape From New York in space but where Kurt Russell excelled as anti-hero Snake Plissken, Pearce’s constant wise cracks and uncooperative manner quickly irritate making for a character that’s hard to root for.

Also irritating are the main villains, two brothers convicted for various reasons who speak in a weird Scottish / Irish accent. Whatever it’s meant to be it doesn’t work, they just sound silly, not scary.

Lockout lacks the tension expected from a prison action film and suffers from the obvious comparison to Escape From New York but it’s easy viewing and will appeal to anyone not familiar with the John Carpenter classic.

For a recent prison thriller check out the brilliant Cell 211 which is reviewed elsewhere here.

Lockout is in cinemas now.

Film: Sometimes They Come back 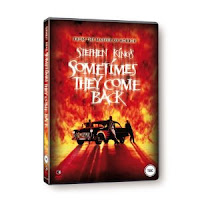 Recently released on DVD in the UK this 1991 shocker is based on a story by horror guru Stephen King.

Tim Matheson stars as a schoolteacher who returns to his childhood hometown and quickly realises that tragic events from the past have returned to wreak havoc on his new life and family.

The bullies who cased the death of his brother (Chris Demetral from the brilliant 90’s tv comedy Dream On) have somehow returned from the dead and are masquerading as students in his class.

I actually saw this on VHS back in the early nineties and it holds up reasonably well.
Matheson gives a terrific performance as the tormented adult who still grieves for his big brother and some genuinely touching moments help this rise above the mostly shoddy material. 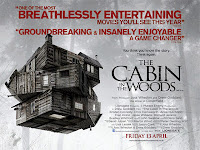 Five friends head off to a remote cabin for a weekend break but all is not what it seems.
From the beginning the audience is made aware of the presence of people watching the group, the whole cabin is rigged with cameras and certain events are engineered, but their purpose is not clear.
This has been hailed as something special, it isn’t. What it is, is an interesting twist on a traditional lost in the woods type movie. For two thirds of the film I was annoyed by the presence of the watchers, I would have been happy with a Friday The 13th type scenario although I couldn’t help but groan when the “zombie rednecks” appeared. What saves this film is the fantastic gung-ho finale when all hell breaks loose, literally.
The cast all perform well and there is a surprising appearance by Chris Hemsworth, almost unrecognisable from his recent turns as Thor.
The Cabin In The Woods is silly and at times frustrating but it still manages to be good fun.
Ric’s Rating: Good
6 comments:
Email ThisBlogThis!Share to TwitterShare to FacebookShare to Pinterest
Labels: chris hemsworth, cinema, good, horror, zombies

A Hollywood stunt driver (Ryan Gosling) has a nice sideline as a getaway driver in this critically acclaimed thriller from director Nicolas Winding Refn (Valhalla Rising).

Gosling begins a tentative relationship with a neighbour (Carey Mulligan) but when her husband is released from prison he brings trouble with him, in the shape of thugs who reckon he owes a huge debt for protection provided. Gosling decides to help pay off the debt by being wheel man on a lucrative job but things don’t go according to plan.

This is much more than the action extravaganza I was expecting. Yes, there is violence, explosive at times, but it’s all handled majestically by Refn who delivers on the promise previously shown in the beautiful but weird Valhalla Rising (see review elsewhere here).

Gosling gives a tour-de-force performance as the quietly spoken driver who always retains an air of menace and Sons Of Anarchy / Hellboy star Ron Perlman is excellent as one of the slimy gangsters.

A film containing as much emotion and thought rarely also has the excitement that Drive delivers. Fine performances, brilliant characters, sleek visuals and a cool soundtrack make it easy to see why people where upset that this was ignored by The Oscars.

A plane is hijacked and the hostages become pawns in a political battle in this 1977 film which has recently been released on DVD in the UK.
Based on actual events this chronicles the daring Israeli rescue mission in Uganda.
There are lots of familiar faces. Charles Bronson gives his usual stoic turn as the army general and there are appearances by James Woods, John Saxon and Robbert Loggia to name but a few. However, it’s Yaphet Kotto’s performance as the irrepressible Ugandan President Idi Amin that steals the show.
The film has aged well and the opening half hour perfectly captures ordinary people mingling while travelling together before being dragged into a life-threatening situation but the running time of 150 minutes makes it seem like forever until we get to the rescue. The lengthy political discussions add little to the drama so when the mission finally came around I was beginning to feel like a hostage myself.
At the end I was glad it was all over.
Ric’s Rating: Dodgy
2 comments:
Email ThisBlogThis!Share to TwitterShare to FacebookShare to Pinterest
Labels: aim publicity, DVD, retrospective

Book: The Man In The Seventh Row by Brian Pendreigh

A Scottish film fan contemplates his life and the influence cinema has had on it in this moving tale which was a launch release from new Scottish e-book publishers Blasted Heath.

The highlight of young Roy Batty’s year was the annual family holiday to a small coastal town in Scotland but it wasn’t sandcastles and paddling Roy was interested in, it was the guaranteed cinema trips that made his eyes light up. Roy and his Dad would go to see classic Westerns such as The Magnificent Seven and the young lad developed a life-long love of the escapism these heroic tales would provide.

Time passes and as Roy gets older all the important events in his life are punctuated by the films of the time and we discover tragic events that have taken place which push him deeper into the fantasy on-screen world.

The author obviously shares his main character’s love of cinema. Films such as The Graduate, Braveheart, ET and Blade Runner are all described in a manner that illustrates the fondness felt for them. Unfortunately the descriptions do contain huge spoilers for all the films mentioned (and many others) so beware if you read this and plan to see them. The lengthy descriptions are also to the detriment of the novel’s plot. The story of Roy’s life gets lost amongst the memories of movies and I even found myself skipping parts of the descriptions of films that I’m familiar with.

The Man From The Seventh Row is a poignant journey down one man’s memory lane but the love of films could have been used more effectively by omitting all movie plot points except the ones essential to the character’s story.

Film: The Cold Light Of Day

When Will Shaw (Henry Cavill) joins his family on a sailing trip off the Spanish coast he thinks his lost luggage is the biggest worry of the trip. Little does he know he’ll soon be fighting terrorists and shady government agents as he attempts to locate missing family members.
Will heads ashore on a shopping trip but when he returns to the boat it’s like the Marie Celeste. Turns out that Will’s Father (Bruce Willis) isn’t the above board businessman he pretends to be and his actions have brought the bad guys to his family.
This is a typical “ordinary guy caught up in extraordinary events” type film but it’s so over the top that even fans of the genre will be disappointed.
The presence of Bruce Willis and Sigourney Weaver doesn’t help. Willis isn’t on-screen enough and Weaver was decidedly ill-advised to take this part, she looks completely out of place as the ruthless CIA agent.
Ridiculous and unintentionally funny this one isn’t worth anyone’s time and how it got a UK cinema release is beyond me.
Ric’s Rating: Poor
4 comments:
Email ThisBlogThis!Share to TwitterShare to FacebookShare to Pinterest
Labels: action, Bruce Willis, cinema, drama, poor
Newer Posts Older Posts Home
Subscribe to: Posts (Atom)