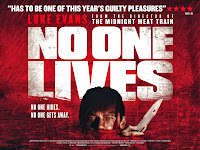 Alicia Bryson returns to the village of her childhood when she hears that her Father’s health has deteriorated. Unfortunately she does not have many happy memories of the house or the man himself, as he was often abusive and violent towards his daughter.

This time though her own daughter, Jenny, is with her and hopefully the little girl will create better memories for herself during the summer spent at Granddad’s.
Unbeknown to Alicia is the fact that their arrival has not gone unnoticed. A stranger has seen them and begins to formulate a plan that will send them both to “Paradise”.

The story is told from the perspectives of Alicia and The Stranger and quickly becomes a bit of a guessing game as to who The Stranger is. Could it be the local Doctor, the pet shop owner, the care home manager or even Jenny’s own Father who comes back into her life after a long absence.

Told from the alternating perspectives of Alicia and The Stranger the story moves along swiftly towards the tension filled finale.

Often uncomfortable but totally compelling The Paradise Trees is an excellent debut novel by Linda Huber and I’ll certainly look out for her future work.

Following a brutal attack on his pregnant partner, Tommy (Aneurin Barnard), is reduced to a nervous wreck who can’t leave his house, but he must overcome these fears if he wants to keep his baby daughter.

This UK horror film opens with a scene so nasty I wasn’t sure I could continue to watch but Aneurin Barnard’s performance as the distraught Tommy is so compelling that I just couldn’t switch off.

Tommy consults guidance councillors and the local Priest (James Cosmo) in a bid to tackle his fears but they are soon realised when his daughter is taken and Tommy is forced to take action.

Like a lot of horrors these days Citadel starts really well and, in this case, the tension continues until the true identity of the hooded villains is revealed. It’s all a bit silly after that but this remains an enjoyable British horror.

Citadel is released on DVD in the UK on 30th September 2013.