Film: The A Team

This movie version of the much loved tv show lacks the charm and charisma of the original.

Swap Vietnam for Iraq and you pretty much know the background to this group of soldiers becoming a team of vigilantes for hire rendering this entire movie pointless if you have seen the tv show.

The film is an introduction to the characters, much like Russell Crowe's Robin Hood was but in this case a 10 minute montage would have done the job.

Liam Neeson (Taken), Bradley Cooper (The Hangover), Quinton "Rampage" Jackson of Ultimate Fighting Championship fame and Sharlto Copley (District 9) all try their best but don't quite manage to pull it off.

Also, the special effects are of a standard acceptable maybe 10 years ago.

The plot centres around counterfeiting US currency plates falling into the wrong hands and the lads must obtain them and clear their names.

All this is purely to pave the way for a sequel which has GOT to be an improvement, if it happens.

Joong-ho is a pimp who was formerly a police detective and some of his girls are missing.

The entire film is based aroung Joong-ho's search for the latest missing girl who has unfortunately been hired by a homicidal maniac.

Good performances all round and some pretty nasty scenes but I expected more from The Chaser. There are no twists here and no grand plan to the killings, once our man is revealed the chase is on and that's it.

Does it end happily? Well, by the time it got there I didn't care much.

Hopefully the upcoming Hollywood remake will (unusually) be an improvement.

Kevin Costner plays John James a newly single Dad in this thriller based on the short story by the excellent John Connolly.
Upon moving into their new house James notices his daughter Louisa (Ivana Baquero) begin to behave strangely. Thinking it's just hormones he leaves her alone and concentrates on his younger son who is struggling to come to terms with his Mother's departure.
Being a John Connolly story all is not as it seems as Louisa is drawn to a strange mound in a nearby field and James begins to suspect that this is more than just teen angst.
The first two thirds of the film are excellent, Costner is fantastic as the Dad struggling to get things right but it all gets a bit silly when the Mound Walkers appear.
Costner fans will love it and Connolly fans, I suspect, will be slightly disappointed.
Ric's Rating: 64%
6 comments:
Email ThisBlogThis!Share to TwitterShare to FacebookShare to Pinterest
Labels: DVD, horror, kevin costner, thriller

Wrong. There are some laughs in this movie but there is much more to it.

Harrelson plays Arthur Poppington, a man with a troubled past who transforms himself into Defendor to avenge a wrongdoing that he doesn't fully understand.

More a morality play and social commentary than a drama or comedy Harrelson captivates as the fearless Arthur who sets out to get the bad guys but refuses to use guns.

Excellent support comes in the form of Elias Koteas as a dodgy cop, Kat Dennings as a hooker who befriends Arthur and Homicide: Life On The Street's Clark Johnson as the police captain.

Wolf Hound: From The Family Of Grey Dogs is the full title of this Russian
fantasy epic which ticks all the right boxes.
After the slaughter of his tribe Wolf Hound vows revenge and we join him and Torn Wing (his pet Bat) on their quest.
This harks back to films like Conan The Barbarian and The Beastmaster and if you can see past the dodgy beards and over the top acting you are left with a satisfying old fashioned story of honour and revenge.
Wolf Hound makes friends and enemies along the way and they are all colourful characters but I can't help thinking some of the names (like Greedy) have been a little bit lost in translation although that's just a small complaint for a film that's big fun.
Ric's Rating: 74%
No comments:
Email ThisBlogThis!Share to TwitterShare to FacebookShare to Pinterest
Labels: action, DVD, swords and sandals, world cinema

It's pretty much a sequel to the original and kicks off with a group of (mostly military) people finding themselves in an unknown place.

The Predators then start hunting them down.

No need to go on about the story as that's about it, the film is about the action and I really don't think there was enough of it, actually I reckon A v P had more.

Brody shows his versatility as a believable action star and the rest of the cast are adequate without being outstanding although Walton Goggins from TV's The Shield steals a few scenes.

No new twists here and not a patch on the original, this just about gets by as a straight forward action movie but I wouldn't recommend a cinema visit, wait for the DVD.

An atmosphere of dread is quickly created as stark images of a virus ravaged New York City emerge. Streets littered with unmoving cars, the infected roaming the streets among famous landmarks and civilians trying to survive.

The book boils down to a series of battles between a Platoon of soldiers (who question orders to shoot American citizens) and the Mad Dogs with a mission to rescue a scientist on the brink of a cure thrown in.

The action scenes are fantastic as the Grunts fight off the infected masses but there are so many soldiers in the story it's hard to become attached to any of them, except in the end when honour is paramount.

Dr Petrova steals the show as she fights her own battles while awaiting rescue, there is a depth to her character missing from the guys and you really want her to make it. But will she? 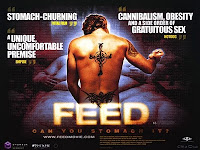 as I'd never seemed to be in the right frame of mind to give it a try. I shouldn't have waited so long as it's a decent little film.

The quest to track down this man turns into a creepy game of cat & mouse as the two exploit each other's weaknesses.

Far better filmed (nice use of colours) and acted (Patrick Thompson and Alex O'Loughlin are excellent) than I expected but this won't be to everyone's taste as there are some pretty nasty themes going on.

If that doesn't put you off then give it a try.

Recommended if you liked Hostel and Seven.

unknown reason) and forced to compete in vicious fights to the death.

He soon escapes and joins a team of wandering fighters as they prepare to travel to Jerusalem.

Well that's it as far as the story goes I'm afraid because from that point onwards the film becomes an aimlessly wandering mess as the gang shore up on an unknown land and face an unknown foe while struggling to know who to trust. Wait a minute, I just made that sound good.

That's the trouble here, it should be good but the story goes nowhere through achingly long periods of complete silence. Mikkelsen himself does not utter a word throughout although the performance is still decent.

This movie was filmed in Scotland and has a mostly Scottish cast so maybe I just couldn't take a bunch of guys I'm more used to seeing in the likes of Taggart and River City (Scottish tv shows) seriously as mysterious warriors. A pity as I so wanted to like it.

It is beautifully shot, all the scenery looks great but being lucky enough to live in Scotland I have scenery every bit as striking five minutes walk from my house.