continues Perry Dawsey, Margaret Montoya and Dew Phillips' fight against the alien invaders who grow inside the human body.

"Scary" Perry Dawsey is an awesome character, he is like Jack Reacher on acid and every time he appears the story cranks up a notch. Recovered from his own infection in the previous book but still extremely physically and emotionally scarred, Dawsey now tracks and kills infected hosts.

Infected was basically Perry's battle with "the triangles" and although there was great character development elsewhere, he was the star of the show, which resulted in a thrilling journey into the mind of a man who wouldn't back down from a fight, no matter how dangerous the opponent or how terrifying the consequences.

Contagious is more of an ensemble piece. The cast of characters is mostly good but the story gets caught up in Presidential decisions and military action and I found myself racing through chapters to get back to Perry Dawsey.

Top billing is shared with CIA Agent Dew Phillips, who himself is a fantastic character, the battle weary veteran must keep control of various volatile situations throughout the book and he does so with all the style of an ageing John Wayne.

Unfortunately the main villain is a little girl and no matter how well it's explained or how formidable a character she becomes I'm just sick of supposedly scary little girls. There seems to have been an abundence of them ever since the film The Ring.

That aside this is still a great read and should not be judged by it's cover. More a well developed, character based, battle for the survival of the human race than a blood and guts (although there is plenty of that too) splatter book.

Read Infected and take it from there.

A team of thrill seekers are cuffed, hooded and abandoned in Redball

Woods. They then embark on a game of survival in this surprisingly good action horror.

Quickly subjected to a violent ambush the eight strangers suddenly realise that what they thought was a game is something far more sinister.

This is a simple idea and we have been here many times before in films like Surviving The Game and Southern Comfort but it is very well executed.

The production team behind The Machinist and Quarantine serve up a fast paced atmospheric treat here as the hunter stalks his prey. Alliances form and break as everyone realises that their lives depend on each decision they make.

The acting from a cast of unknowns is a bit below par but that is a small complaint in this type of film. Recommended for action / horror fans that aren't too fussy.

DVD: Wrong Side Of Town

The marketing people behind this straight to dvd action film have made a clever move. They have convinced everyone that professional wrestler Dave Bautista (known as Batista to grapple fans) is the star, every advert, trailer and poster, even the one featured here, has him as the main man.

The star is actually fellow (slightly less popular) wrestler Rob Van Dam, so called because of his likeness to Jean Claude.

RVD (as he is known) plays an ex Navy Seal caught up in all sorts of trouble when a night on the town with his new neighbours results in the accidental death of a local gangster.

As RVD fights his way home Batista eventually turns up as an old Navy buddy.

The acting is what you'd expect in a film where wrestlers are the stars but Batista does show enough charisma and screen presence to merit another chance. RVD I'm not so sure about, like his wrestling persona he seems slightly awkward and the fight scenes are pathetic given the fact that he spends most of the film with an injured leg but still manages to high kick when required only to then be barely able to hobble away from the carnage.

You could do worse on a boys night in with a few beers but this is strictly for fans of wrestling.

night. The little known Alibi channel has pulled off a coup here as this show deserves to be every bit as popular as it's similar rival The Mentalist.

Nathan Fillion is Richard Castle, a successful crime novelist who, thanks to friends in high places, gets to ride shotgun with NYPD Homicide Detective Kate Beckett (Satna Katic).
Bringing an alternative viewpoint he is able to help the cops with their most tricky cases.

In the pilot episode the duo must solve a spate of killings based around stories in Castle's books.

The show is good, light hearted fun that often plays for laughs despite the grim subject matter and Castle's home life proves to be just as challenging as working with the police. He has his teenage daughter (Molly Quinn) and aging actress Mother (Susan Sullivan) to contend with.

All cast members have great chemistry and seem to be enjoying their work.

Give it a try.

Film: Clash Of The Titans

Avatar's Sam Worthington heads the cast in this remake of the 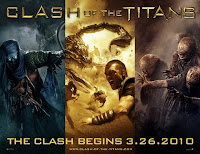 The story has been dumbed down to a simple tale of revenge as Perseus (Worthington) sets about killing God of the underworld Hades (Ralph Finnes) after the death of his family.

Lots of battles with CGI monsters ensue including Medusa who isn't as scary as the 1981 version. Memories of Krull and The Beastmaster come flooding back and this is at times very enjoyable but severely lacks depth.

Worthington is completely miscast as the Greek hero. His Australian accent and GI Joe haircut are out of place and the fact that all around tower over him doesn't help. This is also a totally wooden performance lacking charisma, saved only by support from Liam Neeson, Liam Cunningham and Mads Mikkelsen.

Overall this is still a fun film but even a fleeting apearance by Bubo the mechanical owl from the original doesn't up the charm factor.

and her team of scientists and the tv crew accompanying them decide to venture onto the remote unexplored Hender's Island.

A battle between humans and the super predators of the island follows and we have nice character development with Geoffrey Biswanger and Thatcher Redmond, scientists with opposing views and values.

Unfortunately the final third is where it all goes wrong as the book descends into predictable sentimentality and the creatures get more and more bizarre.

Mr Fahy would have done well to stick to the action and gory elements of the story and a different ending would have left an altogether more satisfying feeling instead of the Deary Me one that the schmaltziness of the ending creates.