Twenty books in and John Sandford's Prey series featuring cop Lucas Davenport still delivers the goods. Every time a new one comes along it gives me a familiar comfortable feeling akin to the one generated by my favourite tv cop show, NYPD Blue.
A botched robbery results in the death of a hospital pharmacy clerk and on their exit the culprits are spotted by Lucas' wife Weather.
The mastermind behind the robbery is the shady Dr Barakat (a show stealing character) and he decides the best way to ensure his own safety is to eliminate ALL witnesses, including his accomplices. Lucas and the guys aren't about to let that extend to Weather who is assigned lovable rogue Virgil Flowers (who has his own spin off series) as her bodyguard while she performs an operation to separate conjoined twins.
The strength in Sandford's writing is the character development, everyone is well rounded and usually (as is the case here) there is no doubt who the villains are, giving you access to their thoughts, circumstances and motives.
An excellent outing and it gets by as a stand alone but the main players have been developed over so many years that if your a fan of crime thrillers I highly recommend starting at the beginning with the fantastic Rules Of Prey. You'll be hooked.
Ric's Rating: 84%
4 comments:
Email ThisBlogThis!Share to TwitterShare to FacebookShare to Pinterest
Labels: Book review, crime fiction, john sandford

The Expendables are a group of mercenaries lead by Stallone and when they are offered a mission by the shady Mr Church (Bruce Willis) it looks like a fool's errand but Sly can't get the images of a small island being ruled by an iron fist out of his head so he decides to go back. You don't think his buddies would let him go alone do you?

The evil General is played admirably by Dexter's David Zayas and Eric Roberts is a typically slimy businessman who pulls his strings and with Steve Austin and Gary Daniels as henchmen it's a formidable set of opponents for Stallone and his men.

The action scenes are tremendous and it all moves along at a blistering pace. The entire cast are teriffic, each adding his own unique presence to proceedings. Special mention goes to Dolph Lundgren who steals almost every scene he is in and to Jason Statham who dominates a lot of the fighting.

The story itself is a simple one but, like Avatar, it's a simple story very well told with excellent characters that you are happy to root for.

It's old school good guys v bad guys with some great one on one confrontations including a nice fight between man mountain Lundgren and small but deadly Li.

There are some dodgy CGI moments but that aside credit goes to Stallone for putting together an amazing cast and, as director, getting the best from each of them to end up with a modern feel good action movie classic. 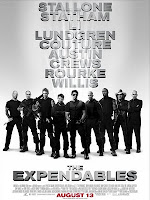 The Expendables hits UK cinemas today.
Head over to http://www.dvdreview.co.uk/ to see my rundown of the muscle-bound cast which includes some of their previous efforts that you might have missed.
Check back soon for a full review.
5 comments:
Email ThisBlogThis!Share to TwitterShare to FacebookShare to Pinterest
Labels: preview 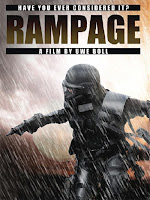 Controversial Director Uwe Boll has a reputation for making really bad films. I haven't seen any others so can't comment but this one isn't half bad.

Bill (Brendan Fletcher) feels put upon by his parents and the world in general. He just can't seem to catch a break. His boss is on his case and his parents think it's time he got a place of his own, the waiter can't even get his coffee right !

With his friend Evan (Shaun Sipos) he tunes into conspiracy theory newscasts and visits angry websites that preach the perils of the world today and predict a bleak future.

This slowly builds until Bill (after a lot of planning) decides to unburden the planet of as many human beings as he can possibly get rid of.

The Rampage itself is ultra violent and hard to watch at times but there are one or two magical comedy moments thrown in, check out the bingo hall scene.

People will say that this glorifies violence but it doesn't. It's a similar story to the one told in Michael Douglas' Falling Down, except this is on Acid.

Fletcher delivers a fantastic measured performance as his frustration and nerves build and old Max Headroom himself (Matt Frewer) turns up as Bill's Dad.

If you can stomach the violence it's well worth a look.

I'm off to see what other "rubbish" films Uwe Boll has directed.

Interesting creature feature from the Director of cult movie Cube.
Two scientists create a creature from the DNA of numerous different animals and use it for medical research. When they are told they cannot use human DNA in their latest creation they decide to go ahead and do it anyway.
When the creature, Dren, is born she is spirited away and kept in hiding as she rapidly matures.
I then expected some sort of monster on the rampage film but this is not the case. What we have is a study of Dren's strange relationship with her "parents" played by The Pianist himself, Adrien Brody, and Sarah Polley.
It's a fine entry into the genre but it does take it's time to get to the point.
Thought provoking but not suitable accompaniment for a six pack.
Ric's Rating: 67%
2 comments:
Email ThisBlogThis!Share to TwitterShare to FacebookShare to Pinterest
Labels: adrien brody, cinema, sci-fi, thriller

First things first, Richard Castle is not a real person. He is a fictional character from abc's Castle (shown on Alibi in the UK, see review elsewhere here) and the book has been ghost written entirely in character based around Castle's involvement with the NYPD.

The novel has Jameson Rook (Castle, get it?), a journalist, shadowing Detective Nikki Heat as she attempts to solve the murder of a Real Estate millionaire.

This is just like reading an episode of the show and it's good fun for fans but isn't likely to appeal to anyone else.

The writing is cheesy and shallow, just like the Castle character would write and there is some nice humour thrown in.

An undemanding read recommended to fans of the show.

Pick up a copy to read my reviews of:

The Blackout - Monsters attack when the lights go out !!

Of course there are plenty of other reviews, DVD and movie news, interviews. All you'd expect from an excellent magazine.
No comments:
Email ThisBlogThis!Share to TwitterShare to FacebookShare to Pinterest
Labels: magazine, published reviews

I also noticed elements from Eternal Sunshine Of The Spotless Mind, A Nightmare On Elm Street, Flatliners and Total Recall as Leonardo Di Caprio and his team delve into the world of dreams to extract secrets and plant ideas. This is by no means an original story.

Di Caprio agrees to penetrate the mind of Cillian Murphy (in his best Hollywood showing yet) who is about to inherit a global energy company but Leo's own guilt issues creep dangerously into the dreams jeopardising the mission and his fellow team members.

Great idea, reasonably well excecuted but two big problems. There is a severe lack of character development, other than DiCaprio we get zero background on the team and, it's a bit boring at times.

As the film drifted into dreams within dreams I often found my own mind wandering to subjects like what I should have for tea, or if I really should have had that hot dog. Others obviously felt the same, two people left after about 40 minutes and at that stage I couldn't blame them.

Fortunately it all kicks off in the final third when we eventually get some action, including the neat gravity twists and it does come to a reasonably satisfying conclusion.

Funnily enough I do have a nagging feeling that it might be better second time around.
Maybe that's just a dream.