A socially awkward couple head off on a caravan tour of England in this offbeat British black comedy from 2012.

Still grieving the loss of her pet dog, Tina (Alice Lowe) agrees to let new boyfriend Chris (Steve Oram) take her on a meticulously planned caravan holiday. The plans soon change when the duo encounter a number of other travellers with murderous consequences.

There are some moments of humour in this otherwise dreary tale which only springs to life with the odd explosion of violence or totally inappropriate comment. Unfortunately it falls into the trap of not being funny enough to be a good comedy or serious enough to make a decent crime ridden road trip romp.

Lowe and Oram are good enough to hold the viewers attention but even their best efforts can’t elevate this above mediocrity.

I didn’t see as many films as I would have liked to in 2013 but hopefully I’ll catch up with some of them soon.

The Hobbit: The Desolation Of Smaug ensured the year went out on a high.

Straight–to-dvd land was very interesting with world cinema releases Jackpot, Thale and Hidden Face among the best on show. I also caught up with the unexpectedly enjoyable Battleship and was blown away by Disconnect.

Book highlights included 2 Scottish authors. Sinclair Macleod’s The Good Girl was a delight and old favourite Stuart MacBride delivered a brilliant stand alone thriller in Birthdays For The Dead. Rod Glenn brought his fantastic serial-killer trilogy to a conclusion (or did he?) with Sinema 3: The Troy Consortium and a captivating double whammy from JA Kerley saw out the year with Her Last Scream and The Killing Game, featuring Detective Carson Ryder.

Reviews for almost everything mentioned can be found elsewhere in Ric’s Reviews.

Films and books included may not have been released in 2013.

I hope everyone has a great Christmas and New Year and remember you can follow me on Twitter @ricsreviews.

Cheers!
4 comments:
Email ThisBlogThis!Share to TwitterShare to FacebookShare to Pinterest

Film: The Hobbit: The Desolation Of Smaug

Bilbo Baggins (Martin Freeman) continues his quest to help The Dwarves get their homeland back from the fearsome Dragon Smaug in the second part of Peter Jackson’s trilogy.

Jackson’s face is the first on camera as he makes a fleeting appearance before we move on with the tale. Two thirds of the film is a chase movie with the evil Orcs on the trail of Bilbo and the gang who are helped this time out by Elves Legolas (Orlando Bloom) and Tauriel (Evangeline Lilly). There are some fantastic fight scenes as the Orcs catch up with their quarry several times prior to the film’s glorious climax in Smaug’s lair.

Voiced brilliantly by Benedict Cumberbatch (Star Trek: Into Darkness) Smaug is a wonderful addiction to this series and more than makes up for the absent Gollum. At no moment do you doubt the validity of a talking Dragon, such is the atmosphere created. The fire-breathing is fantastic too and the battle between Dwarves and Dragon is absolutely terrific.

I had my doubts about this but thankfully The Hobbit: The Desolation Of Smaug exceeds expectations and leaves the viewer crying out for the final instalment. 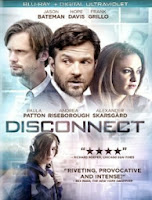 These three interweaving stories all illustrate the influence that on-line activity can have on our lives today.

Released in 2012 Disconnect failed to find much of an audience (I hadn’t heard of it myself) which is a real pity because what we have here is the best connecting-stories drama since the brilliant Amores Perros.

Jason Bateman successfully emulates Robin Williams by growing a beard for a serious part and then managing to carry it off. His is one of the best performances (as a troubled Father) among many on show here.

Max Thieriot (Bates Motel) is also fantastic as the misguided youth who turns to webcam work and then sees a possible way out through Andrea Riseborough’s reporter.

Throw in a desperate man tracking down the person responsible for his financial ruin and you have a totally compelling drama.

There is more going on besides what I have mentioned but you can expect to see some of the characters
overlap into each others stories at some point in proceedings.

Thoughtful, powerful, absorbing and brilliantly performed Disconnect deserves to be seen and is undoubtedly the best film I have seen so far this year.

Available on all the usual formats now.