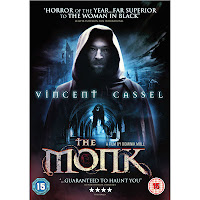 An abandoned baby is left on the steps of a monastery in this French gothic horror.

The boy soon grows up to be the most charismatic Monk within the order and people flock from far & wide to hear him preach, but when a strange newcomer arrives things begin to spiral out of control quickly for the revered Ambrosio  (Vincent Cassell)

The new arrival is a boy called Valerio who wears a mask to hide burns sustained in a house fire. The mask makes Valerio a very creepy character indeed and the whispering voice that accompanies the chilling look adds to his unnerving presence.

Sadly the mask soon comes off and the entire film takes a turn for the worse when Valerio’s true identity is revealed.

Even a few murders and a great performance from Cassell can’t get this back on track. When the tension is gone, it’s gone.

The Monk is a potentially genuinely scary horror that suffers by turning into a tale of forbidden love.

It’s available on DVD in the UK now.

Book: Through The Eyes Of Strays by Glen Krisch

This latest collection of short stories from Glen R Krisch contains blasts of horror and sci-fi that will entertain fans of the newly revitalised format.

Sudden Sanctuary – A young woman seeks out her internet boyfriend during a virus outbreak.

Filtheater – A vagrant with special powers makes a horrible discovery.

Gram Knows – The stand-out story finds young Bobby in receipt of a letter that asks for his help. He soon uncovers a tale of violence and abuse but the story isn’t as straightforward as it seems.

Winterlochen Academy – Trapped in an old Church a group of students & teachers attempt to fend off hungry wolves but little do they know that the wolves are not the most dangerous creatures trying to get in.

These are all great fun but there are one or two stories that don’t live up to the standard achieved by those mentioned above.

Overall this is a very interesting and entertaining collection which should be used as an introduction to an author with bags of potential. 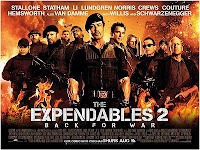 Sylvester Stallone and the gang return and this time their mission is personal.

While carrying out an assignment for Mr Church (Bruce Willis) the team encounter Vilain (Jean Claude van Damme) with fatal consequences for one of them. Barney (Stallone) immediately vows vengeance and so begins the pursuit of Vilain and his feared militia.

The Expendables 2 opens with a mega-violent rescue and then goes directly into the next mission which results in the revenge scenario. No time is spent on character development and the film suffers greatly for that.

Little is seen of Statham and the first movie’s show-stealer Dolph Lundgren. In fact, with the notable exception of Van Damme (who proves he can still deliver on the big screen), there was hardly any need for the supporting cast. This felt very much like a Stallone film, which in itself is no bad thing, but the original was such a good ensemble piece that I expected more of the same.

It is pretty cool to see Bruce Willis, Big Arnie and Chuck Norris get involved in the action but all three spend most of their screen time sending themselves up, which is ok the first time, but after four or five “I’ll be back” type quotes it begins to grate.

This sequel does deliver on a strictly action level. The fight between Stallone and Van Damme is fantastic and every 80’s action film fan’s dream come true. Let’s just hope that if there is an Expendables 3 a bit more effort goes into building on the good work done in the original.

The Expendables 2 is in cinemas now.

Jeremy Renner (The Town, Avengers) takes over from Matt Damon in this mediocre continuation of the franchise.

Renner is Aaron Cross, an agent trained in the same programme as Bourne but when the powers-that-be decide to shut down the programme Cross finds himself being hunted by the very agency that trained him.

The sporadic bursts of action save this film from being completely boring. The plot is made several layers more complex than necessary and the constant “incident room in state of emergency” scenes soon become tiresome.

Even Edward Norton (American History X, The 25th Hour) as the shadowy authority figure adds little to this and if it wasn’t for a reasonably exciting final half hour this would be getting an even lower rating.

The Bourne Legacy is in UK cinemas now.

Evil does not exist. That is the opinion of Detective Andrew Hicks, a man who has encountered many murders but firmly believes all such crime has a relatively mundane reason behind it.

The brutal murder of a woman recently separated from her partner is quickly categorized as a domestic case by Hicks but when the estranged Ex produces a solid alibi and more victims turn up he begins to realise that there is something going that isn’t easily explained.

As Hicks pursues the culprit there are also intermittent chapters in which a young boy recounts gruesome events he has witnessed. What relevance, if any, does this have to the case?

This is an immediately absorbing tale that explores strained family relationships and the consequences of them. Hicks is an intriguing and somewhat complex character who struggles with his own issues as the case envelopes him. There is also an old candle-maker, Hicks’ pregnant wife and the mysterious General, each of whom add depth to the story.

Dark Room can be labelled a traditional police procedural / whodunit novel but the surreal feeling and multi-layers created by the author elevate this high above standard fare.

See elsewhere on this page for my interview with Steve Mosby.

A young Princess defies her Mother’s wishes with disastrous results in the latest beautifully animated tale from Pixar.

The Queen has invited young men from across the land (an atmospheric medieval ) to compete for her daughter’s hand but Princess Merida is having none of it. Determined to avoid the marriage she sets out on a journey that will not only change her own fate but that of her family and country.

The voice cast features Kelly MacDonald, Billy Connolly and Kevin McKidd with Connolly as the stand-out in his portrayal of the passionate but clumsy King.

This isn’t anywhere near the genius of Toy Story and it does get a bit too silly but the wonderful setting and colourful characters make this a nice easy viewing experience for parents and kids although some darker scenes may not be appropriate for younger children.

Brave is in cinemas now.

Aided by a trio of fighting Nuns our hero must fight his way through outlandish characters such as a kung-fu baby Jesus, a midget wrestler and of course, the mannequins.

This book is like a wild episode of Creepshow, The Twilight Zone and tales from The Crypt. Throw in a bit of Fright Night with Peter Vincent and you get the idea.

I almost abandoned this one after a particularly vile opening chapter which described an appalling act of animal cruelty. This is quickly explained away as a hoax but a bitter taste did remain.

The rest of the book is a bizarre but occasionally compelling read that requires much imagination on the part of the reader.

Unusual and at times inspired but ultimately just too off-the-wall for me.

Former soldier and bodyguard James Bishop finds himself framed for murder and sent to prison in the exciting debut thriller from Jason Dean.

Determined to clear his name Bishop plans a daring prison break and once he’s outside the walls he begins to track down those responsible for setting him up.

Aided by a group of unlikely allies which includes computer hackers, a helicopter pilot and a safecracker, Bishop’s quest takes him back to his old team and uncovers a secret that reaches right to the heart of the US government.

This novel reminded me a lot of the brilliant tv show Prison Break and successfully recreated the frantic pace which that possessed. Bishop is a likeable character and as this is the first in a series I expect that he will be developed accordingly.

Anyone who enjoys or has become indifferent to Lee Child’s Jack Reacher books should check out The Wrong Man as this series definitely has the potential to be every bit as popular.