Two young girls are rescued after spending years fending for themselves in a remote cabin and are sent to live with their Uncle and his musician girlfriend.

As the girls attempt to adjust to regular life the questions remain about how they managed to survive alone for so long.

It quickly becomes apparent that they weren’t exactly alone. Someone or something was watching over them, and they call her Mama.

This ghost story is superior to many similar films thanks to a great script and some fine performances. Megan Charpentier and Isabelle Nelisse are fantastic as the girls who struggle to live in everyday family life while still enjoying the company of their ghostly guardian.

The story behind Mama herself is also the type of tragedy befitting such a tale.

Mama is in UK cinemas now.

Here we have another 3 disc collection from World Wrestling Entertainment (WWE). This time it’s the top 100 moments from their long-running tv show Monday Night Raw.

Discs 1 & 2 feature the countdown from 100 to 1 which includes classic moments such as:

These will appeal to WWE fans old & new but this set features lots of moments covered better in The Attitude Era set (see review below) and does feature lots of relatively recent moments. I mean who can really agree that Santino Marella’s comedy tea party should be included?

This is decent enough but the fans that this will appeal to will enjoy The Attitude Era much more.

Available now in the UK. 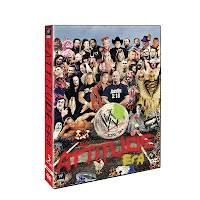 “It was like a big party…and everyone was invited”. So begins the story of the most controversial and influential period in American professional wrestling.

The year is 1997 and WWE (then known as WWF) chairman Vince McMahon announces that the company’s flagship show, Monday Night Raw, was about to become an edgier style of programme. This was an attempt to win the ratings war with rival company WCW.

The result was some fantastic tv. Gone were the typical hero vs. villain type storyline and in came an altogether different bunch of characters who blurred the lines between right and wrong.

“Stone Cold” Steve Austin was arguably the most popular and his long-running feud with McMahon himself resulted in some fantastic, and often hilarious, moments. Other characters who came to prominence at the time were The Rock (now a movie star), Mick Foley and his various personas and the outrageous group known as Degeneration X. An iconic moment of the era was when DX “invaded” WCW.

The Attitude Era has been released as a 3 disc set:

Discs 2 & 3 feature many matches and moments from the show including dangerous ladder matches, a brilliant hardcore title match and the car crash tv that was the Brawl For All. This was WWE’s ill-judged attempt at having “real” matches. It was a career-ender for many of the participants, either through injury or a complete failure in their marketability afterwards.

The Attitude Era is available on & Blu-ray in the now and it’s a cool nostalgia trip for anyone who remembers the time. It also works as a showcase for WWE, proving to some that it wasn’t always the kid-friendly show it was in the 80’s and has somewhat become again now.

Book: The Party by JD Carter

A London gangster revels in the attention lavished upon him at his 50th birthday party but little does he know that one of the guests plans to expose him as a murderer and informant.

At 181 pages The Party is a relatively short book which makes it suffer when too many characters are introduced. The plethora of “geezers” is hard to keep up with but the various trips into the murky past of all involved does keep the reader interested enough to see how events pan out.

Film: Death On The Staircase: The Last Chance

This captivating documentary film re-visits the case of Michael Peterson, a man convicted of murdering his wife, as he attempts to convince the court that he didn’t receive a fair trial.

Peterson has spent eight years in jail and with various appeals already rejected he cuts a rather forlorn figure as we see him in his cell and wandering around the prison yard.

Throughout proceedings Peterson’s dogged attorney David Rudolf and almost his entire family, including 4 out of 5 of his children, remain steadfast in their support of a man who has always protested his innocence.

You’ll notice from the poster that this is actually a sequel. The original series, The Staircase, covered the initial case & trial but thankfully we get enough of a re-cap here to cover all the pertinent points. The case is anything but straightforward and as the original trial moves toward it’s conclusion some surprising and shocking information comes to light.

Evidence later emerges that questions the motives and reliability of one particular prosecution witness.

Are Peterson and his team successful in their pursuit of a re-trial?

You’ll need to catch this riveting documentary from French film-maker Jean-Xavier De Lestrade to find out.

Death On The Staricase: The Last Chance was shown on 4 in the as part of their Storyville series but as you can see it’s also known as The Staircase II so keep your eyes open for it.

Film: Bullet To The Head

Back in the days of good old VHS one of my favourite directors was Walter Hill. Hill was responsible for classics such as The Warriors, 48 Hours, Red Heat and Extreme Prejudice. Bullet To The Head heralds his return to the big screen and with Sylvester Stallone in the leading role we surely have an action extravaganza on our hands.

Stallone plays hitman Johnny Bobo who is determined to find those responsible for the death of his buddy (Jon Seda). Forming an unlikely alliance with a cop Bobo soon  sets about tracking down the bad guys, leading to a confrontation with the formidable Jason Momoa (Conan The Barbarian).

This formulaic action film is probably more suited to the bygone era of VHS. At 66 years of age Stallone shows he can still cut it but the story fails to engage and the mild attempt to resurrect the buddy movie falls flat.

Bullet To The Head is very predictable and could have benefited from some more action scenes but it’s still a must for Stallone fans. Catch it in cinemas now.