Korean star Rain plays Raizo, an orphan who, along with others was raised to become a Ninja and carry out high profile assassinations.

Naomie Harris (28 Days Later) is a government agent who stumbles across some evidence that compells her to investigate the legend of the Ninja.

What follows is a series of action scenes in which Rain gets to show off his considerable skills as he attempts to eliminate the clan that raised him.

In an inspired piece of casting 80's Ninja movie stalwart Sho Kosugi steals the show as the brutal Father figure to the young orphans he trains.

This is a bit thin on the ground plotwise and the acting, Kosugi aside, is just plain dull.

More suited to dvd so wait for that, get the beers in, switch off your brain and enjoy.

Meryl Streep and Alec Baldwin play a divorced couple who hit it off again at their son's graduation in this comedy.

Streep is excellent as the ageing single mother trying to get her life in order when she starts to have an affair with her ex husband.

Baldwin too is fantastic as the ex who is now married to the younger woman that he originally had an affair with while married to Streep.

Lots of laugh out loud moments as the oldies carry on like a pair of teenagers, even indulging in smoking pot.

Steve Martin shows up as the new man in Streep's life and he is ok but looks slightly odd from too much botox and something suspicious about his hair.

That aside this is surprisingly the first 2010 contender for film of the year. I expect it will be beaten as the year goes on but it'll be worthy of a top ten spot.

on patrol with real life cops.

Seagal has supposedly been a serving deputy sheriff for 20 years and has just now decided to make this public. Income from the straight to dvd market can't be so good.

In the three episodes I have caught so far Seagal looks better than he has done in his last few movies, gone is the long leather coat, and he seems very comfortable on camera in some potentially dangerous situations.
At one point a suspect reaches under the seat of his car after announcing that he has a pistol. Up steps Big Steve to unceremoniously wrench the guy from the car and send him sprawling across the street. When things settle down the unfortunate induividual comes to his senses, looks around and whispers to another cop "That's Steven Seagal over there" when the cop tells him it was Seagal that threw him out the car the guy becomes starstruck. From menacing thug to starstruck fan in two minutes, priceless.

Elsewhere we have Seagal and the team helping out with rebuilding houses destroyed by Hurricane Katrina and Seagal and his band (he is an accomplished musician and I happened to catch a gig in Glasgow in 2007 where he put on a great show) performing a charity concert for a local children's hospital.

Far better than any film he has made in the last few years so highly recommended for any Seagal fan or anyone who enjoys any real life cop shows.

Look out for Seagal's return to the big time in the upcoming film Machete in which he stars alongside Robert De Niro. 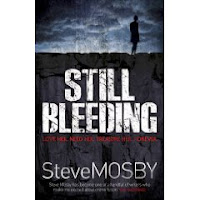 1. THE LOCH BY STEVE ALTEN

Murder mystery set against the legend and magnificent backdrop of Loch Ness.

Disturbing tale takes you on a journey to the dark side of the internet and into the world of murder and suicide memorabilia. Mosby is one of the most original authors on the scene today and I highly recommend his books, but be warned, they are not for the faint of heart.

The long running Lucas Davenport series still delivers the goods but you'd need to start way back at the beginning with Rules Of Prey to get the best from this one.

Join "Scary" Perry Dawsey as he tries to stop "The Triangles" taking over his body. This book is far more than you'd expect. Highly recommended.

Ignore the predictability of the story and just enjoy the sheer spectacle. You too will want to be a Na'vi.

Everything a re-make should be.

Will Smith gives an excellent portrayal of a man looking to make amends.

Tarantino is back on form with this WWII drama. Top notch script and great performances all round.

Most unusual these days, a comedy that's actually funny and literally about a hangover. Brilliant.

Not as good as the original but Cyril Raffaelli and David Belle should be given a break in Hollywood after another amazing set of action scenes.

Appearances by Marvel characters Gambit and Deadpool along with another good turn by Jackman and great action earn this one a place on the list.

Daniel Craig is much better than any of his Bond performances in this WWII tale of survival.

Fourth and best book so far in the Carson Ryder series.
This installment takes Ryder out of his usual Alabama juristiction after his brother Jeremy escapes the mental institution he has been in since murdering five women.
Ryder does not dominate the book and in fact Jeremy and Ryder's partner, the ever loyal Harry Nautilus , steal the show.
This is a serial killer novel that provides gruesome killings, believable characters and even a couple of twists that a veteran of these type of novels like me didn't see coming.
There is no need to have read the previous books to enjoy this one but they will add a decent amount of background, especially to the relationship between Carson and Jeremy.
Highly recommended for fans of the genre.
Jack Kerley's website sates that the decision to go with J.A instead of Jack was a marketing one. Go figure.
Rick's Rating: 80%
No comments:
Email ThisBlogThis!Share to TwitterShare to FacebookShare to Pinterest
Labels: Book review, crime fiction, jack kerley, serial killer
Newer Posts Older Posts Home
Subscribe to: Posts (Atom)