get by and give his young kids a decent upbringing.

When people start randomly attacking others Danny is determined to mind his own business but the trouble will arrive on his doorstep sooner or later.

The first half of the book is a fantastic character study of an average family man just keeping his head down and wanting a quiet life. It has nice black comedy as we get introduced to his thoroughly unpleasant working environment.

As the violence escalates Danny decides to keep his family safe for as long as he can. This is when the book starts to slow down and proceeds to trundle along to a pretty unsatisfying conclusion.

Moody shows enough potential to merit a look at the sequel, Dog Blood, which is due out soon.

Horror / thriller fans who like a spattering of blood should give it a try.

Having recently mentioned Jack Reacher in another review (Contagious by

Scott Sigler) I thought I'd better check in with the man himself.

Reacher, a former Military Policeman, now spends his time drifting from place to place inevitably getting caught up in all sorts of mayhem along the way.

Lee Child has created a splendid character and the series has been ongoing for some time now making this hard to recommend for newcomers.

This time out Reacher witnesses a suicide on the New York subway and finds himself caught up in the investigation that follows. This moves along nicely, but it's a jog rather than a sprint, as Reacher finds out who the bad guys are and sets about taking them down.

The attraction of Lee Child's books is Reacher himself, he's a guy who is confident in his own ability, even veering towards cockiness, but he does it in a cool style that leaves you imagining you'd be just like him if you had his skill set yourself.

Recommended if you're already a fan but if you're new to Lee Child (and Reacher) start with Killing Floor or The Visitor, the two best books in the series.

outlaw and features some fine performances.

We join Robin in the battlefields of Richard The Lionheart's Crusades but this is the story of what happens when the skilled Archer returns to his homeland.
Saying more would spoil the story but if you have any interest in the character you will enjoy this film.

Crowe is in fine form and he is matched by Cate Blanchett as Marion, Mark Strong as Godfrey and overshadowed by the marvellous Max Von Sydow as Sir Walter Loxley.

Throw in a few good battle scenes and you've got all you need for a top notch summer blockbuster movie. It's my recommendation to kick off your summer season this year.

Can you believe it?

I've actually had some reviews published in a magazine.

If you're in the UK you can pick up the latest edition of DVD & Blu ray Review in the shops now where you will find my brief reviews of:

Pimp - A week in the life of a London pimp.

The rest of the magazine isn't half bad either.

Thanks to Matt Chapman for the opportunity.
9 comments:
Email ThisBlogThis!Share to TwitterShare to FacebookShare to Pinterest
Labels: magazine, published reviews

Film: A Nightmare On Elm Street

Ok, if you don't know the story here's the basics. A group of teenagers all have nightmares featuring a disfigured man with knives for fingers. Trouble is, if you get killed in the dream you die for real.

Haley does his best as Krueger but he doesn't bring out the character's sinister charisma in the same way that Robert Englund did. What he does do is return the to the evil roots that got lost along the way in the countless sequels to the original that descended into comedy horror.

There are some good scenes and one or two unexpected moments but this is mostly a scene for scene remake aimed at an audience with no memory of the original.

That's not to say that it isn't good fun for horror fans. The story remains powerful and compelling and all involved deliver decent performances although I feel a bit for Haley because after his show stealing turn in Watchmen and now this, he must be wondering when he'll next get a part that doesn't involve wearing a mask. 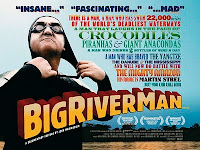 the length of the Amazon.

All the ingredients of a fantastic film are here: Unlikely Hero, insurmountable odds, exotic location, danger and suspense.

What we get is a depressing diary of a man attempting to justify his hunger for fame by disguising it with lofty causes (saving the Rainforest etc.) while driving himself to the very brink of despair. It aint pretty and it certainly aint entertaining.

Strel's achievements are amazing and this could have been so much better if it hadn't been made by Strel's son Borut, yes Borut. The cheesy music and cheap production reminded me a lot of the other Borat and not in a good way.

High points include Strel's constant drinking and him swimming casually past a floating dead body but there's nothing here that couldn't have been covered better by a 30min tv documentary.

DVD: We Live In Public

Compelling documentary film charting a tumultuous period in the life of

Consistently ahead of the pack Harris made a fortune in the mid nineties thanks to the .com boom and embarked on a series of bizarre projects that saw him fritter most of it away.

A Big Brother style community was set up in a bunker under New York City which filmed the exploits of a somewhat questionable group of people 24/7. It didn't end well.

Harris then decided to broadcast his and his girlfriend's life together for all to log on and see, the results are interesting to say the least.

A remarkable film about a remarkable man this deserves to find an audience and the mere fact that you are reading this review goes a long way to proving some of Harris' theories.

Everyone with any interest in the internet (that means you) should check it out.