Someone Is Missing declares the tagline to this film, I think it's

From the get go I suspected this would be a bit ropey as the boat ride to the island was so cheaply filmed you could almost see the set wobbling. Then we have DiCaprio in a part that he is still too fresh faced for, I couldn't get on board with him playing this grisled war veteran tortured by his past. Ben Kingsly and Max Von Sydow collect their paychecks playing doctors but both have no decent material so maybe it's harsh to blame them for the shoddy performances they produce.

This film also suffers from The Sixth Sense Syndrome where I guessed the twist about 90 minutes before I was supposed to rendering the remainder of the film pointless.

All a bit boring so nothing much to recommend unless you are easily pleased or want to watch DiCaprio just for the sake of it.

Along with The Wolfman this enters the all new 2010 Turkey category.

More like an eternity as we join Jim Caviezel (The Count Of Monte Cristo) trying to save his marriage on a romantic getaway.

These are thoroughly loathsome characters and I was wishing a grisly demise for them both within 10 minutes.

The theme of nature fighting back against the damage caused by humans is lost as it just takes too long for anything to happen and when it does you don't care.

There is something compelling about watching a warring couple and the performances are ok, they just can't save the dire material they have to work with.

Give this a miss unless your a big Caviezel fan.

Eckhart plays Burke Ryan, who after the accidental death of his wife, writes a memoir on coping with grief, the success of which makes him a minor celebrity.

During one of his seminars he meets Aniston who plays a florist just out of a messy relationship.

The two embark on a slow burning relationship which helps each come to terms with their own problems.

Nothing special here but Aniston and Eckhart are endearing enough in their roles to make this reasonably enjoyable. 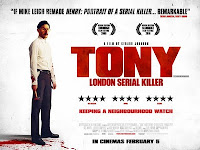 Tony is the type of character that we all encounter at some point in any city. He is a loner, a bit of an odball, unemployed, unclean, desperate for approval and acceptance.

Played brilliantly by Peter Ferdinando Tony finds himself in various situations that he cannot quite handle throughout the film, some of which have dire outcomes.

The story kind of shuffles along without really going anywhere but the uneasiness of it all and Ferdinando's performance make this worthwhile for any fan of Henry: Portrait Of A Serial Killer or the book Killing For Company.

this remake of a little known George A Romero film.

It all kicks off when local cop Olyphant is forced to shoot and kill a gun weilding, seemingly drunk, mechanic.

More and more townsfolk begin to show symptoms of some strange zombie like disease when the military move in and start rounding everybody up.

What follows is an enjoyably frantic fight for survival amongst total chaos and both Olyphant and Mitchell deliver good performances and are supported well by Joe Anderson as the deputy.

Some well placed moments of humour amidst all the carnage add to the feeling of desperation but this is no comedy horror, the humour simply depicts ordinary people reacting with wit and sarcasm in a very surreal situation.

Recommended to all horror and thriller fans. 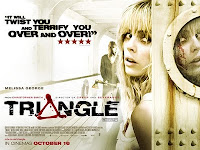 She plays a single mother struggling to cope with her autistic young son who decides to treat herself to a day sailing with some friends.

After a slow start this film becomes very interesting as people begin to be bumped off and we are thrown into a very strange environment indeed.
Unfortunately it all becomes a bit muddled and leads to a rather silly ending.

This film borrows heavily from Memento and could have been so much better if a true purpose to it all was revealed.

A big surprising consolation is that this shows that Melissa George can actually act, she delivers a good performance and should now go for some serious parts instead of all these dodgy horrors.

This one starts with a bang as Cross is called to a murder scene only to realise that one of the victims is an old flame of his and the pace and action doesn't let up as the pursuit of those responsible leads to Nigeria.

The change of setting is very welcome and throws Cross into a world where he is an Alien and struggling to even survive from the get go while trying to remain focused on his reason for being there, confronting The Tiger. A small complaint about Cross himself is that he remains whiter than white in even the most trying of circumstances, this is a character that could do with a few vices.

The Tiger is an horrendous villain and more than a match for Cross (who is without his huge buddy Sampson) in every way and this makes for a tense battle between the two.

Ghastly settings like the KiriKiri prison and the refugee camps bring home the horrors of Africa and some of the atrocities comitted reminded me of the film Blood Diamond, we have killer kids here too and anyone who enjoyed that film will like this.
Bear in mind that although Alex Cross was played adequately by Morgan Freeman in a couple of films (Kiss The Girls, Along Came A Spider) this is no sixty something character, Cross is still a reasonably young man.

A must for any fans of the series, this is also recommended to any fans of fast paced action thrillers and the short chapter format helps the story hurtle along to it's conclusion.