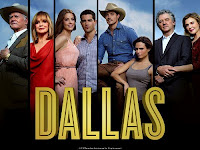 The Ewings are back!

The world is a different place since ’ previous 13 year stint ended and this is reflected in the show. Bobby is happy breeding cattle on Southfolk and J.R languishes in a nursing home suffering with clinical depression. Meanwhile J.R’s long-suffering ex-wife Sue- Ellen is running for political office.

The oil business wheeling and dealing is now done between the younger generation of Ewings. Bobby’s son Christopher is investing in alternative energy while J.R Jr.  follows in his Father’s footsteps by attempting to locate a new source of oil.

In a TV & movie market saturated with re-makes and re-boots it’s very refreshing to see original characters, played by the same actors, brought into a current setting.

has enduring appeal, thanks largely to the lack of choice available when it first aired, and the team behind this version have shown guts and guile by employing a strategy aimed at attracting both old and new fans. The series also promises cameo appearances by other original cast members.

This is a must-see for anyone who saw the original show and an interesting alternative drama for those bored with formulaic detective type series.

is currently showing on Channel 5 in the .