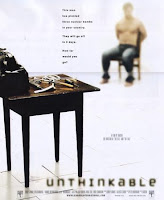 When Michael Sheen (Frost / Nixon) transforms himself from Stephen Arthur Younger to Yusuf Atta Mohamed in the chilling opening scene of this topical drama you are immediately absorbed into the world of terrorism and those trying to protect against it.
What follows is not the typical Hollywood, race against time to stop bombs exploding action film, it's a character driven ensemble drama that has fine perfomances from Sheen, Samuel L Jackson and The Matrix's Carrie-Anne Moss.
Jackson's character goes by the name of H and he is a specialist
interrogator known for getting results. The methods he uses to attempt to extract information make for very uncomfortable viewing, especially in such a mainstream Hollywood movie.
The script has you questioning your own beliefs as Mohamed's motives are revealed and Director Gregor Jordan has done an excellent job in creating an edgy hard hitting drama the likes of which is a rarity from the Hollywood movie factory. Hopefully others will follow suit.
Ric's Rating: 86%
Email ThisBlogThis!Share to TwitterShare to FacebookShare to Pinterest
Labels: 2010 contender, drama, DVD