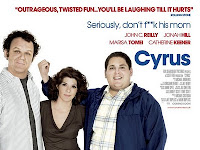 to terms with life as a singleton when he meets Molly (Marisa Tomei), the two quickly begin a relationship before Molly's 21 year old still-at-home Son (Jonah Hill) becomes a serious problem.

This starts off mildly amusing but quickly becomes a creepy Oedipus complex drama that is neither dramatic or funny.

The character of Cyrus is a loathsome man-child that no one in their right mind would tolerate for five minutes let alone attempt to work around while forming a new relationship.

I get that it's supposed to be funny and touches on a subject that is true to life in a lot of families but they should have went for all out comedy (which would have worked) instead of this weird mix that just doesn't work.