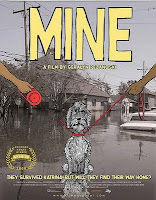 1. Mine – Captivating from the very first minute, this heart wrenching documentary follows Hurricane Katrina survivors in their harrowing attempts to be re-united with their beloved dogs which they were forced to leave behind.

2. The Town – Ben Affleck’s tale of Charleston bank robbers would have been no.1 in any other year. It’s even better than Gone Baby Gone, cementing Affleck’s status as a top quality director.

3. Tony – Peter Ferdinando deserves nothing short of an Oscar nod for his amazing portrayal of a socially challenged loner who resorts to murder as a way of making friends. Outstanding.

4. The Expendables – Sylvester Stallone delivers the kind of film that action fans have been longing for as his crack team of mercenaries attempt to take down an oppressive regime.

5. Rare Exports – A movie from Finland about Santa? This dark take on the Santa legend is a welcome change to the usual Christmas movie drivel.

6. It’s Complicated – Meryl Streep and Alec Baldwin excel in this excellent American Pie for the over 40’s brand of comedy.

7. Spiral – A geek with mental issues finds purpose when he begins a relationship with a work colleague. How long will the tranquillity last?

8. Hot Tub Time Machine – Four friends find themselves back in the 80’s after taking a dip in a magical hot tub. Far better than expected.

9. Rampage – Tense journey into the mind of a disillusioned young man with horrific results. Controversial director Uwe Boll is at the helm of this surprisingly well-acted and tense drama with an inspired ending.

10. The Fourth Kind – “Real” footage is mixed with the fictional account of this creepy story of alien abduction.


Notable mentions also go to The Losers, Machete and The Crazies.

All of the above (except Mine and The Fourth Kind) are reviewed elsewhere here.

Films included were not all necessarily released in 2010.
Email ThisBlogThis!Share to TwitterShare to FacebookShare to Pinterest
Labels: 2010 contender, list, top films