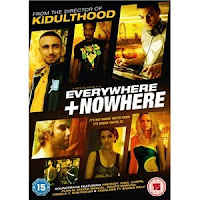 Being a young Muslim in London isn’t easy these days and Ash (James Floyd) is torn between the traditional family values pressed upon him by his older brother Ahmed (Alyy Khan) and his desire to become a successful nightclub DJ.

Ash and his friends are regulars at the local club and his sister (Shivani Ghai) is seeing the resident DJ, Ronnie (Simon Webbe from boyband Blue). Ronnie agrees to give Ash a chance at the club but just as things are looking up, many personal issues threaten to ruin the opportunity.

The cast, especially James Floyd, are all fantastic in their portrayal of conflicted individuals. Adam Deacon (Anuvahood) delivers another fine performance as Zaf and Art Malik (Ghosted, True Lies) pops up as Ash’s Uncle.

Emotionally charged and very relevant it’ll appeal to fans of films like Shifty (see review elsewhere here) but will also please anyone who enjoyed the comedy film East Is East as it has similar family dynamics.

It’s another slick presentation of contemporary urban life from Kidulthood director Menhaj Huda and it also boasts a cool soundtrack.

Everywhere & Nowhere is released on DVD in the UK on 3rd October 2011.