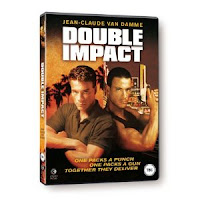 This 1991 action movie gets a DVD release in the UK on 19th September 2011 courtesy of Second Sight.
Following the murder of their parents, six month old twins Chad and Alex are separated. Chad moves to California with Uncle Frank (Geoffrey Lewis) and Alex is left at a Hong Kong orphanage.
Twenty five years later the brothers (both played by Jean – Claude Van Damme) reunite for revenge. The twins must overcome their personal differences and take on the villains, including female body-builder Cory Everson and perennial martial-arts movie bad guy Bolo Yeung.
This has stood the test of time surprisingly well. Following the recent reality show Jean – Claude Van Damme: Behind Closed Doors (see review elsewhere here) and his upcoming turn in The Expendables 2 it’s a timely reminder of how much fun a JCVD movie can be.
Ok, the effects are outdated and the acting is cheesy but this is still a very enjoyable action movie that showcases Van Damme’s considerable skills which, hopefully, will be gracing the big screen again next year.
Ric’s Rating: 68%
Email ThisBlogThis!Share to TwitterShare to FacebookShare to Pinterest
Labels: DVD, jean claude van damme, retrospective