Book: Now You See Me by SJ Bolton 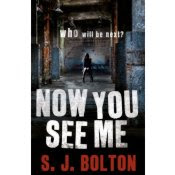 When police officer Lacey Flint witnesses a murder she becomes involved in the case, against the wishes of certain senior detectives. It soon becomes clear that the killer has an interest in Lacey herself as well as the most notorious serial killer of all time, Jack The Ripper.

Lacey shows her value to the investigation when she reveals her own fascination with The Ripper and provides insight that just may help catch Jack’s modern day equivalent.

As the story progresses it takes a cool twist showing that there is more going on here than a straightforward copycat. Flint’s own murky past becomes relevant and she has to decide if she can help catch the killer and remain on the force.

This is an entertaining serial killer novel that moves along nicely thanks to short snappy chapters. There are also some fine characters on show. Lacey herself manages to surprise while her colleagues Joesbury and Tulloch provide interesting support.

The final reveal is a bit too much of a stretch of the imagination for me but it’s a compelling tale that cleverly combines facts from the original Ripper murders with smart contemporary fiction.