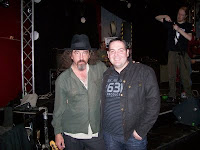 Back in 1996 when Country Music Television was on air in the UK I often tuned in to catch “Rebel Country” a nightly hour of the edgier side of Nashville.
One such night I happened across a video featuring a shaggy haired, bearded, bespectacled character I hadn’t saw before. His name was James McMurtry and the song was Levelland.
My taste in music was forever changed.
Imagine a combination of Bob Dylan, Bruce Springsteen and Tom Petty and you’d be somewhere in the vicinity of McMurtry’s sound.
Thirteen years later I got to meet the man himself (see picture) and see him perform live at The Bongo Club in Edinburgh. It was worth the wait.
Featuring mostly songs from his last studio album Just Us Kids the gig was tremendous and McMurtry was equally at ease performing solo as he was with the backing band, The Heartless Bastards.
Highlights were the title track Just Us Kids and performances of older songs like No More Buffalo and Too Long In The Wasteland.
Had he performed my old favourite Levelland (as some fans beckoned) he would have scored a perfect 100%. A small nitpick at an otherwise excellent performance.
Hurry back James.