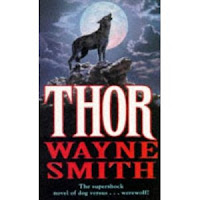 Forget the Norse God of Thunder with the upcoming blockbuster movie, this is……

The supershock novel of Dog versus …….Werewolf !

This book is much more than the above tagline suggests. It’s more of a study of the relationship between Dog and Man than a horror, told entirely from the Dog’s perspective.

Some years ago I saw a so – so horror film called Bad Moon and I was so intrigued by the concept of a family Dog protecting his “pack” from a supernatural Beast that I made a point of seeking out the book it was based on, it is quite rare. I wasn’t disappointed.

Thor is a German Shepherd, a natural guard dog, but he is usually a gentle giant who takes great pleasure from the love and fun that his family provide.

However, when Uncle Ted comes to stay all of Thor’s natural instincts tell him that something is amiss and he must use all of his guile to protect the family from the threat that only he knows is coming.

Thor is a fantastic leading character, a true Hero who acts through love, loyalty and devotion, even in the most trying of circumstances.

Being a dog owner myself I recognise many of the characteristics displayed and Wayne Smith explains these and the Dog’s thought processes in a charming eloquent way that will appeal to anyone who has ever owned or had a close relationship with Man’s Best Friend.

The human characters are great too. The parents who struggle to rationalize their beloved dog’s behaviour. The kids, especially Brett, who is the only one that realises what is going on are excellent too and we have the conflicted Uncle Ted who is well aware of what he has become.

This is riveting stuff and if only it had one or two more action scenes it might have achieved a perfect score but that’s a trifling complaint because this is a remarkable and moving book that will live long in the memory of anyone lucky enough to read it.

Unfortunately Wayne Smith seems to have dropped off the radar, a pity.
Ric's Rating: 95%