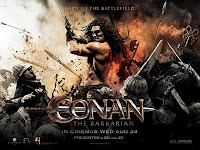 Jason Momoa attempts to emulate Big Arnie in this remake of the fondly remembered 1982 movie.

Young Conan (Leo Howard) witnesses the slaughter of his village and the murder of his Father (Ron Perlman) and vows vengeance against the perpetrators, led by Khalar Zym (Stephen Lang).

What should be a fun swords & sandals tale quickly becomes dull as Momoa makes for a plodding Conan, he doesn’t have the screen presence or charisma for such a big character. Leo Howard is much more believable as the ferocious younger version.

Also, Stephen Lang (great in Avatar) isn’t a convincing villain. He just looks like an old guy trying to mix it up with brutes half his age and the garb he dons for the finale transforms him into a crazy mash up of Medusa and Big Trouble In Little China’s Lo-Pan.

Ron Perlman (Hellboy, Sons Of Anarchy) gives the best performance but isn’t in the film long enough to have a major influence.

Just as with the recent Clash Of The Titans remake this one falls short which makes me think that these type of films are probably best suited to early 80s VHS, which some of us may look back on through rose tinted glasses.