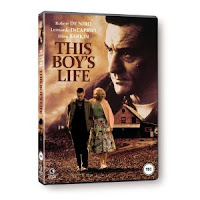 Recently released on DVD here in the UK by Second Sight this 1993 film serves as a stark reminder of just how good Robert DeNiro can be.
This is the true tale of the childhood of author Tobias Wolff who moves town to live with his Mother’s new husband, the seemingly affable Dwight (DeNiro).
Dwight’s true obnoxious personality soon emerges and Tobias is subjected to mental and physical abuse while his Mother (Ellen Barkin) looks on.
This is an acting masterclass from DeNiro, he absolutely nails his portrayal of the deluded Dwight, who is convinced that he has the boy’s best interests at heart. Leonardo DiCaprio is fantastic too as Tobias, a young man still trying to find his way while dealing with a horrendous family life.
Never having seen this before I was completely captivated from the beginning and even if you’ve already seen it it’s worth another look. The 1950s setting ensures that there is no dated feel and the snippets of information at the end provide suitable closure on all the characters involved.
Ric’s Rating: 89%
Email ThisBlogThis!Share to TwitterShare to FacebookShare to Pinterest
Labels: aim publicity, DVD, leonardo dicaprio, retrospective, robert deniro