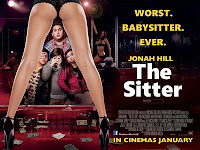 Jonah Hill (Superbad, Cyrus) proves that he's a more than capable leading man in this comedy that mixes Adventures In Babysitting (aka A Night On The Town) with American Pie.

Noah Griffith (Hill) agrees to look after the children of his Mother's friend while the "oldies" are out for the evening but, as expected, chaos ensues.

Griffith agrees to pick up his girlfriend from a party and obtain drugs from the local dealer, all with the kids in tow. The group then find themselves chased by gangsters and caught up in many awkward situations.

Corny and predictable but often hilarious this will appeal to fans of Horrible Bosses and The Hangover. Hill is great as the down-trodden Griffith and he manages to make the character likable.