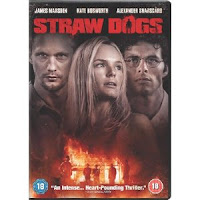 David Sumner (Marsden) and his wife Amy (Bosworth) decide to return to her hometown, a tranquil setting that should be conducive to David’s writing.
They soon hire a group of locals to repair their barn and tension quickly builds, leading to a sexual assault on Amy.

I haven’t seen the 1971 version but because of it’s reputation I was expecting something more visceral than what’s on show here. The attack on Amy is very unpleasant but it lacks the power required for this type of scene to suitably shock. Subsequent events also seem somewhat anti-climactic.

There are some nice performances, especially from James Woods, but for a controversial rape / revenge drama check out the recent remake of I Spit On Your Grave (see review elsewhere here).