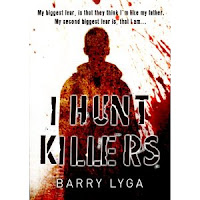 Is the son of a notorious serial killer about to follow in his Father’s footsteps?

People are being killed in the town of Lobo’s Nod and Jasper Dent soon recognises a modus operandi. The perpetrator is mimicking his Father, the most prolific serial killer in American history, Billy Dent.

Tormented by memories of his horrific upbringing, Jasper decides to use the terrifying skills taught to him by his deranged Dad to track the killer down while also resisting the murderous urges instilled in his psyche.

This is a treat for fans of Dexter and The Silence Of The Lambs. It has echoes of both of these excellent serial killer tales while retaining its own individuality. As well as Jasper and Billy there are some fantastic supporting characters. Connie, Jasper’s feisty girlfriend is a force to be reckoned with as she attempts to keep the troubled young man on the straight and narrow. Haemophiliac best friend Howie also contributes greatly to the tale and then there’s crazy Grandma Dent to contend with.

By using the unique perspective of the main character Barry Lyga has provided a refreshing twist in what is often a tired genre and even though I did manage to guess most of the ending, that didn’t make it any less enjoyable.