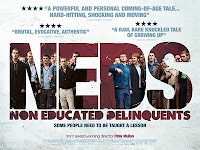 Scottish actor and director Peter Mullan casts a host of unknowns in this all too familiar story of a promising youngster being led astray.
The story is set in the Glasgow of 1972 where flared trousers and oversized shirt collars go hand in hand with the culture of drinking and gang violence.
I'd much prefer to see my home city portrayed on screen in a positive light. I can only think of one film, Late Night Shopping, which has done so.
In this film we have bored teenagers resorting to stabbing each other with little or no reason for their behaviour and absolutely no remorse, even from the main character.
This may present itself as a coming-of-age / redemption story but it's a pretty depressing and ugly film that depicts violence in a way not dissimilar to the recent I Spit on Your Grave remake (see review elsewhere here).
Some of the young cast give good performances but I have to wonder how much of a stretch it is for them as Mullan claims to have picked them from the type of streets shown in the film.
This will gain cult following from the very people it condemns and has already received rave reviews from some critics eager to show an understanding of disaffected youth.
Watchable and sometimes compelling but too often disheartening, this is more suited to tv than cinema and could potentially encourage impressionable viewers into the lifestyle shown.
Ric's Rating: 45%
Email ThisBlogThis!Share to TwitterShare to FacebookShare to Pinterest
Labels: cinema, glasgow, peter mullan, scottish