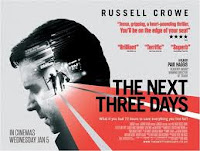 When Lara Brennan (Elizabeth Banks) is convicted of murder her husband John (Russell Crowe) struggles to keep up the legal fight while adapting to his new status as a single Father, raising their young son.
As pressure mounts from all angles John hatches a plan to break Lara out of jail. Will he go through with it?
Writer/Director Paul Haggis (Crash) delivers a tension filled roller coaster ride that also marks a return to form for Crowe. His portrayal of an ordinary man forced to either take action or face the fact that his beloved wife will be in prison for the next 20 years is compelling stuff. It has echoes of my all time favourite tv show Prison Break but you are kept guessing which way Crowe's character will go until you actually see him make his move.
There is excellent support from Banks along with almost cameo (but terrific) turns from Brian Dennehy and Liam Neeson but the film rests firmly on Crowe's shoulders which prove to be broad enough to easily handle the weight.
This is riveting stuff, you will be fully supportive of the plan while wondering if John should just move on with his life, for his own sake and that of his son.
It's 2011's first must-see movie. Don't miss it.
Ric's Rating: 96%
Email ThisBlogThis!Share to TwitterShare to FacebookShare to Pinterest
Labels: 2011 contender, cinema, drama, russell crowe