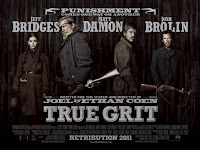 Accompanying them on their quest is LeBouf (Matt Damon) who also has issues with Tom Chaney.

This is a beautifully shot, well acted Western but it rarely comes to life. It merely shuffles along all the way to an anti-climactic ending with a completely pointless epilogue scene tagged on.

The awards nominations for Steinfeld and Bridges were well earned but this proves that great acting alone does not make a great film.

This is a poor man’s Unforgiven, so just watch that instead.
Ric's Rating: 55%
Email ThisBlogThis!Share to TwitterShare to FacebookShare to Pinterest
Labels: cinema, jeff bridges, western