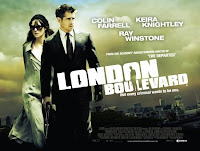 Colin Farrell plays Mitchell, a man who is determined to go straight after a spell in prison in this adaptation of the novel by Ken Bruen.

Mitchell agrees to help his friend Billy (Ben Chaplin) collect money for a local gangster but quickly realises that it's something he doesn't want involved in. Unfortunately the boss (Ray Winstone) has plans for Mitchell, leading to an inevitable confrontation between the two.

With the exception of Farrell due to his wandering accent (it goes from Irish to posh boy to cockney geezer, sometimes within the same sentence) the performances are good. Winstone is as reliable as ever and both Kiera Knightley and Anna Friel are fine as Mitchell's love interest and sister respectively. David Thewlis is also surprisingly good.

The trouble here is that director William Monahan unsuccessfully attempts to copy the style of Quinten Tarantino. The loud soundtrack quickly irritates and even the credits have a Tarantino feel about them. Farrell's character also seems to dither about too much, often choosing to be violent or passive at the wrong times.

It kept me watching but I was disappointed.