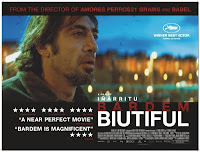 Javier Bardem (No Country For Old Men) delivers a stunning performance as a man with many troubles in this powerful Spanish drama from director Alejandro Gonzalez Inarritu (Amores Perros).

Uxbal (Bardem) is struggling to raise two children alone and although he still loves his estranged wife he’s not sure he can allow her back into their lives due to her alcohol problems and emotional instability.
Meanwhile he makes a living finding work for illegal immigrants which involves deals with unsavoury businessmen and corrupt cops. All this is done while he keeps an alarming secret, his rapidly failing health.

The entire film rests on Bardem’s performance, for which he was deservedly Oscar nominated, and he manages to portray this complex individual with a dignity that enables you to root for the character despite some moral ambiguity.

Uxbal also happens to be able to communicate with the recently deceased, an area of the film that is touched upon so rarely that I wonder at it’s inclusion.

Some much needed joy is provided by the relationship between Uxbal and his children, he is totally devoted to them and there is great rapport between Bardem and the young actors, in fact all the supporting cast help bolster the lead performance.

This is a fine drama and although some more lighter moments would have enriched the overall experience it’s another example of the top quality film making that exists outside Hollywood.