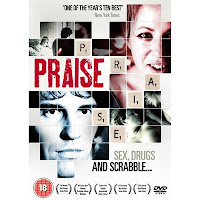 This quirky Australian drama from 1998 finally makes its way onto DVD in the UK.
Gordon (Peter Fenton) resigns from his dead end job and begins a relationship with former co-worker Cynthia (Sacha Horler). Each has their problems, he is a chain-smoking asthmatic and she suffers from terrible eczema and emotional insecurity.
Their relationship relies heavily on sex so when the passion fades the pair find themselves wondering if they can deal with the realities of everyday life. This leads to heavy drinking and drug use.
Fenton and Horler are fantastic in their portrayals of troubled individuals who find solace together, however long it lasts.
It’s a captivating film that marked an impressive debut for director John Curran who went on to helm Stone which starred Hollywood heavyweights Robert DeNiro and Edward Norton.
The ending is rather inconclusive and it frequently lacks the emotional spark required to make it fantastic but this is a poignant piece that will remain with you long after the end credits roll.
Ric’s rating: 72%
Email ThisBlogThis!Share to TwitterShare to FacebookShare to Pinterest
Labels: drama, DVD