Film: A Lonely Place to Die 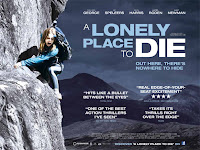 A group of climbers venture into the beautiful Highlands of Scotland (ok, I’m biased) to tackle some treacherous peaks. Their trip soon becomes a race for survival upon the alarming discovery of a captive girl.

Gripping from the vertigo inducing opening scene, this fine British film moves along at a cracking pace as the reluctant rescuers attempt to outrun the warring factions in pursuit of the girl.

Melissa George (Triangle, The Amityville Horror) heads the cast which features lots of familiar faces from UK and Scottish television, all of whom perform well and look very comfortable in what must be a first for many of them.

The finale lives up to the rest of the film when it comes to tension and entertainment but it takes place during a rather bizarre street carnival more akin to the streets of Rio or New Orleans than Inverness.

Anyone who enjoyed the likes of Vertical Limit and the Sidney Poitier mountain movie Deadly Pursuit will love it and it’s another plus for British film.